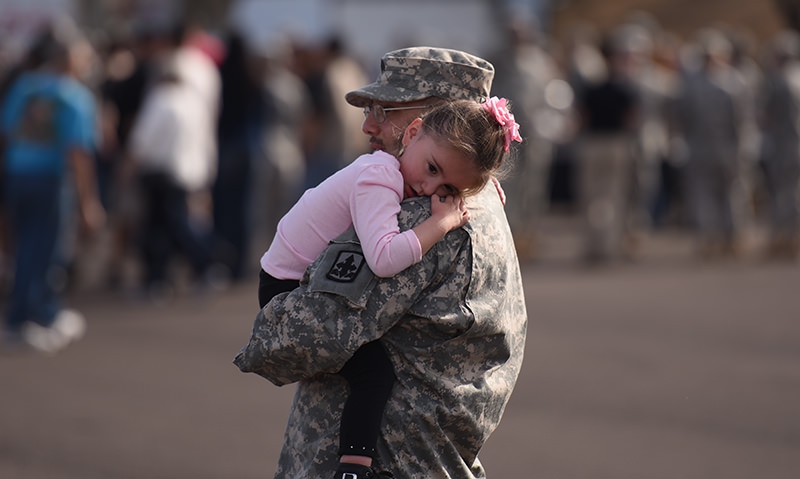 Photo by Lucas Carter/The American Legion
A knock on Brent Wightman’s front door several years ago changed his life.
The U.S. Army veteran and father of two young children lost his job due to the inability to work after multiple back surgeries from a service-connected injury. Without a job, Wightman faced the reality of losing his home to foreclosure. After hearing of Wightman’s plight, Legionnaire Howard Hudson – who has since passed – visited him to offer support through The American Legion’s Temporary Financial Assistance (TFA) program.
“We filled out a TFA application right there and my whole life changed after The American Legion got involved,” said Wightman, a member of Post 176 in Waverly, Iowa. “If it hadn’t been for the Legion, I would have been trying to figure out how to clothe, house and feed my kids. The American Legion gave me a mission and a purpose again. They saved my life.”
The Legion’s TFA program has provided more than $15,200,000 in cash grants to eligible veterans with minor children since its establishment in 1925. The grants – which benefit nearly 650 families and 1,500 children yearly – help families in financial need meet the costs of shelter, utilities, food, clothing and medical expenses.
Newly elected American Legion National Commander Charles E. Schmidt has made it his mission during his tenure to raise $1 million for TFA. “It is our job to take care of veterans and to take care of their families,” Schmidt said. “Touching the lives of veterans and their families is who we are.”
U.S. Army veteran William Henry understands the power of TFA first-hand.
Henry had difficulty finding viable work after returning home from his second deployment in 2013. With a meager weekly unemployment check, he found himself in financial strain with the possibility of losing his home and family.
“I did what a lot of folks do when they get home from deployments and are faced with financial and family hardships – I shut down, I tried to fix it with alcohol, I became a recluse,” said Henry, a member of Post 329 in Plainfield, Ind. “I was in a really dark place in my life.”
Henry’s life positively changed once he sought mental health counseling from VA and made a plea for financial assistance on social media. “I didn’t know where to turn, but I hoped someone I knew did,” he said. “Luckily that was the case.”
American Legion Internal Affairs Division Deputy Director David Elmore, who had deployed to Afghanistan with Henry, saw his plea and reached out. Elmore connected Henry with the Department of Indiana which assisted him with filling out a TFA application. Henry not only received a TFA grant, the connection with the Department of Indiana resulted in employment due to his experience as a public affairs specialist with the Indiana Army National Guard. He was hired as the department’s communications director.
“We were so close to losing everything before Elmore contacted me; he is a great friend,” said Henry, now the department’s assistant adjutant. “I couldn’t believe or understand how everything fell into place like it did. It was divine. I got my life back. I finally felt in control again.
“The TFA program is essential to help veterans and their families. Every day I see and hear about veterans being helped by this crucial program. The TFA program changed my life and gave our family a hand up. On top of that, the Department of Indiana gave me the chance of a lifetime to assist our great Hoosier veteran families and work within the organization.”
TFA is limited to minor children (17 years or younger) whose biological parent, or legal guardian, is a veteran and is, or would have been, eligible for American Legion membership. However, Legion membership is not required. Veterans who wish to apply for a TFA grant must first contact their local Legion post.
“I’ve seen TFA change the lives of so many veterans and their families,” said Wightman, who now assists veterans with TFA grants and educates posts throughout Iowa about the program. “When they’re worried if their utilities are going to get shut off or if their kids are going to have a Christmas, I hand the (TFA) check to the veterans and see the smile on the kids’ faces. That makes it all worth it.”
TFA is funded through The American Legion's Endowment Fund. To donate, click here.